"Is the stew done?" my sister Michelle said, peeking around the corner of the kitchen. "The pressure cooker stopped hissing. That means it's done, right?"

"Pretty sure," her twin Heather replied. "And Mom didn't leave any money for pizza. That means we get stew."

"And I'm hungry," my other sister Beth replied. "How much longer?"

The four sisters stood together in front of the silent pressure cooker, frowning. "Well, who's going to open it?"

A quick note on pressure cookers. The whole "pressure" part is not just a clever name, it's the whole way the meal is cooked. Under hot, steaming pressure in a pot that literally locks on the top. It's a prehistoric way to cook stew but by all that was holy, the stew that came out of Mom's pressure cooker was blessed by the stew GODS. It was better than pizza. It was better than Burger King plus a Lion King toy.

But Michelle was right, it had stopped hissing. Maybe it was ready.

Things we also did not know at the time: only thirteen minutes had passed since it stopped hissing.

"Yeah, let's go ahead and open it," Heather said. Michelle, Beth and I took cover in a doorway. 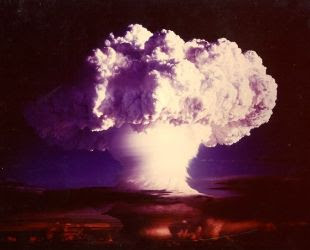 Three months later, we were STILL finding bits of potato on top of the picture frames and slivers of stew sodden carrots on the underside of the cabinets.

Like all good after school specials, there was a moral in our disaster. Sometimes things need to simmer a bit before breaking them out to the world. Emotions, decisions, (ahem) MANUSCRIPTS...(I'm ahemming to myself, naturally), etc. Despite what we think, very few major decisions in this world are harmed by a few more minutes of waiting and pondering.

Here's to sitting and waiting, my hungry friends. The stew's TOTALLY gonna be worth it. 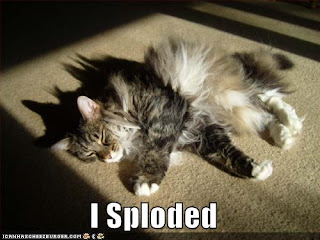 Unless we all splode first. Which I really hope doesn't happen.


CORRECTION: My sister Heather just reminded me that it was BETH that told her to open the pressure cooker. Not her. Just so it's clear.
Posted by K. Marie Criddle at 7:31 AM

Oh no! Was there any stew left to be delicious?

Oh man! I've never used/ been around a pressure cooker but they sound exactly like the sort of thing that would scar me for life because of something exactly like this.

Glad you all survived the stew explosion.

Taryn - Sadly, no stew left. But PLENTY on the ceiling for the picking! :)

L.T. - And this is EXACTLY why our family stopped using pressure cookers. Even being around one anymore gets me REALLY nervous.

Knowing me, I would have opened that thing right away! I've never used a pressure cooker before and it sounds like it's safer if I didn't ;).

BTW, I had no idea you had three sisters!

Oh man! Not an explosion? That is a total bummer, but I am loving the picture of that cat!