Tuesday night found me in the final stages of revision on a manuscript. This particular sucker's been hanging around, getting rewritten, critiqued, rewritten, yelled at, rewritten and edited for quite a few months now and finally...

...finally, I was pleased with it. The whole thing, by golly! I shuttled it off to those that could do something with it and--just like that--it was done. For now, of course.

The interesting thing is that barely minutes after sending it off, I went shuffling through Scrivener, opening up old projects and trying to get inspiration for my next one. Are you kidding me, Criddle? What's wrong with you? Relax and watch a little Top Chef, why don't you?

I couldn't help myself. I was riding that mythical, elusive wave of productivity: the Writer's High. It's like a runner's high, but you don't sweat (as much.) Writers suffer through a myriad of quandaries such as writer's block, outlining issues, plotting problems, flat characters, stale dialogue, query rejections, flat-out rejections, rewrites and edits that go nowhere. But when that writer's high comes along? Mmm, boy howdy. Embrace that moment, week, month, however long it hits us. We're never entitled to it, so when it does come along we've got to love it while it lasts.

I guess my writer's high happened because I finally saw the fruit of my hard work for the last months: a solid, 85,000 word manuscript that's undergone 12 rewrites and a heck of a lot of gnashing of teeth. And I'm pleased with it. By jingo, I LIKE it. (Here's to hoping some other people do too, amiright?) 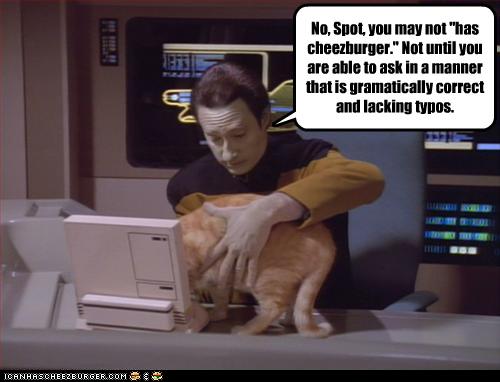 Oh man. Data would have a field day with my first drafts. Happy writing, kitties and androids!
Posted by K. Marie Criddle at 11:21 AM

Oh my, how I miss Commander Data. I might have to watch some old STNG tonight. :)

Yay for you!! That is some major accomplishment, no wonder you have The High. I'm a finisher too - I get this extra-double-shot-espresso-high going whenever I finish things (which, is probably why I'm so determined to do so). I get a mini-version of the High whenever I finish a draft (coming up on one of those soon) - just more juice to keep me going!

Thanks, Susan! Good luck on finishing the draft and I will totally be joining you in old STNG episodes tonight (couple thousand miles away, of course.) Mmm...Riker.

Oh, man. I was gonna say something post-related, but Data! Catz! SO FREAKING FUNNY!!!

I think I get my writer's high from other writers. Even if they're sadly amaturish like myself. Knowing I'm not alone in my illogical love of words and saying what I mean the way I hope to say it.
That's why I love my internet writer friends so much. They let me peep in on their lives enough to keep me excited about writing.
And of course my real life writer friends are completely invaluable. A five minute chat about our current projects gets me so excited to push on and make some more progress.

Is that my baby crying in the next room? Crud. There goes my high. Over and out.

My writer highs are plentiful in these early days :). Mostly because the ohmygoshiamactuallywriting feeling gets me every time I sit down to write or edit. But my biggest high so far was probably last night, sharing my pages with my first critique group and you liked it! By golly, you liked it! I wasn't in love with my intro yet and you guys helped reveal where the holes were, gave me new ideas to explore. So THANK YOU!!! Can't wait to share more!