Going Home (despite that Thomas Wolfe was right)


Apologies, naturally, to The Josh Joplin Group for so blatantly ripping off a song lyric for the title. (Great band though! Give them a visit here: http://www.joshjoplin.com/)

So back in the day, author Thomas Wolfe (not to be confused with Tom Wolfe...both talented but VERY different people) wrote the book LOOK HOMEWARD, ANGEL. It was a thinly veiled--albeit gorgeously written--autobiography of Wolfe's life growing up in a small(ish) town. When it came to press, fame and wide readership, people closely associated with Wolfe began to recognize themselves or their situations in ANGEL's "fictionalized" setting and characters. 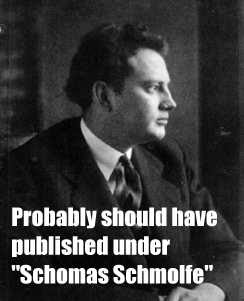 Almost in response, Wolfe wrote what would posthumously be published as YOU CAN'T GO HOME AGAIN; a story about a writer who writes a story (that's chiasmussed up) about his hometown and is subsequently ostracized for it. 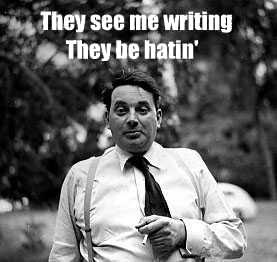 Wolfe, you so meta.

As writers, a lot of times we can't help BUT draw from our personal experiences to create our fictional worlds and characters, right? What do you do when a friend/family member/co-worker/significant other sees themselves---for better AND for worse---in your stories?

Thomas Wolfe was right, you can't go home again. But we also can't divorce ourselves completely from the world if we want to write truthfully about it; that's why we benefit so much from random experiences, odd encounters, strange jobs and weird relatives. Just try and tell me you haven't done something just because you thought "this will be great story fodder someday."

So, dear people: Is your sweeping epic fantasy really just your old high school set in Middle Earth? Has anyone noticed? Have you ever changed something in your writing to steer it further away from the truth...or closer? Or have you ever just said "forget it" and written a sequel that further exploits your hometown?

Be careful: I'm totally writing down all you say to be used in a future book.

(Photos courtesy of Univ. of N.C. Library at Chapel Hill)
Posted by K. Marie Criddle at 9:06 AM

Excellent points, and ones that I've long pondered, honestly.

Here's the thing-- I appear to be somewhat strange for a writer in that I don't model my characters after real people, at least not consciously. My characters tend to pop into my head fully formed and fully fictional, which is actually how I prefer it-- there's been some hullabaloo lately about people recognizing themselves in authors' works and suing the author for libel/ defamation, etc. And winning.

But that isn't to say that some of my real world doesn't pop in. Since I write in first person, my narrators tend to take little pieces of me-- it's only natural when everything you write has the word "I" in it. But I try to tone down me and let them speak for themselves. And my most recent MS is the first one where my mental picture of a character is a particular, real-life actor.

In other words, I have no clue and probably haven't contributed anything to this discussion. Ugh, this writing thing is HARD!

As you know I'm new to the writing biz, but it's so difficult to create a totally fictional person from scratch. Aside from L.T.'s uncanny and awesome ability (yay!) to have fully formed fictional characters pop into her head, I doubt there are many characters that aren't inspired by a real life person or real life TV character. At least at first.

Maybe the trick is to have more than one inspiration mixed into one character. Or, at least be mindful about your characters and try to avoid basing them completely on a real person. But great post! Something I will definitely think about as I develop characters. Which is HARD!

I can only think of one character I've conciously based off of someone I know. A little brother in a story I wrote when I was thirteen based off of my own little brother. If in some moemnt of madness this particular manuscript were published (if I ever talk about doing so you all have my permission to lock me in a cell somewhere far away. With pen and paper of course) and my b rother were to object to any similarities/characteristics he felt were misinterpreted I would reply --honestly --that though I used him as a drawing board to come with ideas for the character the character himself took on a life of his own. Not sure that would stand up in a court of law.

I've been lucky so far; just about everyone who sees themself in my novel are excited about it. And if not, were, I know plenty of people to use as molds . .

My trilogy is set in my home town - cliche, I know - but there are a lot of interesting things/places there. I figured, why not. I've had to take creative license with some street names and buildings but I don't think the citizens will mind.

You know, this kinda makes me wonder who in YOUR life recently got upset with you for "putting them in your book." I don't suppose you'll share though.

I can't think of any character I've purposefully modeled after someone I know in real life. When a new character shows up, it's very like meeting a flesh and blood person for the first time. We get to know each other a bit. And if I like them and they trust me, I'll begin to tell their story.

The only difference is that with flesh and blood people, I'll sometimes think "Hey, that person reminds me of my friend so-and-so." But of course they're really quite different from so-and-so. This has never happened with one of my characters. Yet. When it does, I hope I can resist the urge to force them into so-and-so's mold.

Man, it's awesome to see so many thoughts and experiences out there; I really appreciate you guys stopping by to add something to the conversation.

And Robin...I do have one friend/family member (relationship changed to protect the oversensitive) who objects to any character than has his/her same hair color because, apparently "they are always mean and they are always me!"

I suppose I have to be more careful next time. :D