A Quest for Converse

This week's theme at the Archives is "Mundane Adventures." Yesterday, L.T. Host relayed the perilous tale of driving in the rain on San Diego freeways. My adventure was just two weekends ago, during one of my best friends weddings (in which I was the matron of honor - by the way, my speech went very well!).

The bride had ordered a pair of purple Converse from the online store to wear at the reception. Her groom and the groomsmen we wearing green Converse, and she wanted purple to go with the wedding colors. When they arrived, she realized they were just a bit too big so she sent them back and requested a rush order. However, the people at Converse must not have understood that she REALLY meant it. The following Tuesday just wasn't going to cut it. So this is the adventure we found ourselves in, less than 24 hours before "I Do" ...

'Twas the night before the wedding, and all through Orange County, not a purple Converse shoe was in a size 7, not even a knock-off. The bride and her bridemaids rushed from Target to Wal-Mart, the only stores still open at 11pm, to find the elusive purple shoes. One was too faded, another just too hideous. We were glued to our phones and Yelp apps searching for the nearest shoe stores, calling when one looked promising.

And lo! A glimmer of hope! There was a Converse store a mere two miles from our hotel that didn't have purple, but they had some new ivory ones with gold trim. The salesperson promised that they would be perfect (she was a bride-to-be too). Our bride was elated - gold would go well (she was wearing tall sparkly gold heels for the ceremony, after all). We ended our pursuit for the evening.

After just a few hours of sleep, we awoke on the big day! The pouring rain outside wouldn't dampen our happiness and excitement for our friend. The hair stylist and make-up artist arrived a little after 7am to make us look picture-perfect. Myself and another bridesmaid got prepped first, and then we offered to get the shoes even though we still had clips in our hair and make-up undone.

The store was in an outdoor mall. The wind and rain whipped and swirled around us, flipping my brand-new umbrella inside out and mussing our hair. Water soaked through our shoes and pants. After a few wrong turns, we found the store and were presented with the golden Converse.

These shoes would not do. They were not the "classic" Converse our bride desired. And to be honest, I thought they were ugly. After confirming with the bride, we began a new quest in the store. Surely we could find something suitable in these many racks of Converse shoes. 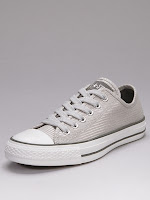 In the clearance aisle, in the corner of the store, I found them. A classic Converse shoe with shimmering silver stripes in size 7. They looked like wedding shoes. We snapped a picture and texted it to the bride (which I don't have, but these are the shoes - much prettier in person!).

And she said yes! She was ecstatic!

Our quest complete, we returned to our hotel room and ventured through the hairspray fog (seriously, we had to leave the air conditioning on to filter the air!) and handed the shoes to the bride. They fit perfectly. The stylist fixed our hair and our Cinderella was the bell of the ball in her sparkly Converse shoes.

Have you had any mundane adventures lately?
Posted by Keriann Greaney Martin at 10:26 AM

Email ThisBlogThis!Share to TwitterShare to FacebookShare to Pinterest
Labels: Keriann Greaney Martin, Mundane in the Membrane

Ah. A tough quest fulfilled. There is almost noting more satisfying than that.

We at Global Webs Link make committed and astonishing applications utilizing the most innovative and forefront improvements. The applications made by our affiliation are apparently spellbinding. We work with endeavors to amassing adaptable Top Mobile app and website Developer Company in USA that handle veritable issues for your business and clients. Our developed and ace versatile application engineers bundle gather advantageous applications for the most part legitimate for your image and business
https://ewebsitedevelopment.com/
Top Mobile App Development Company in USA

Be well, buddy! Looking forward to see more post from your side!

Assignment Help from professionals is a simple way to put an end to your struggle. We are a leading organization of assignment help services and we provide the best assignment help writing service to help you gain good grades. if you seek assistance from our assignment help online experts, you will get a very high-quality assignment.

This is a great resource that you are providing and you give it for free. I like to see a blog that understands the value of providing quality resources for free. Thanks for sharing the best article post. Hindustan Mega Mart
https://www.hindustanmegamart.com/

I think this is an informative post and it is very useful and knowledgeable. Therefore, I would like to thank you for your efforts in writing this article. Thanks for sharing the best article post.
Dream Home Makers is a Delhi Real Estate Builder dealing in the Transaction/ Purchase of Apartments/ Flats, Farm Houses. Dream Home Makers-Delhi Property Builder- Turning Dream Into Reality. Dream Home Makers Turning Dream Into Reality. About; Properties; Contact; About. customers on their digital conversion trip, manage innovative following-generation technology results.
https://www.dreamhomemakers.in/