If you're someone who spends a ridiculous amount of time following pop culture (me, oh most embarrassingly me), you'll know that this summer, Hollywood will thrust upon us approximately one billion sequels and prequels. Yessir, we've the distinct pleasure of anticipating masterpieces like "Transformers: Dark of the Moon", "Furious Five" and "Big Momma: Like Father, Like BARF---I'm sorry, I couldn't even finish that one.

Even a lot of the books I'm reading lately have been book one in a trilogy. But if the intention of a sequel is not explicitly stated on the cover, it drives me batty. I have a huge problem with getting to the last page and screaming "AND THEN WHAT????" Especially in libraries. Sorry, patrons.

I'm really not an anti-sequel person, though. For books and movies I truly enjoy, I'll gladly fork over a little extra cash to spend some more time in a great story. Sometimes the story is just "too big" (like, say, the Star Wars trilogy) to fit into one volume. Sometimes the world is so incredibly enticing (say, the Wheel of Time series) that it just begs for another long look.

The general word in the publishing world is that you shouldn't start writing a sequel until the first book has been picked up for publication. However, this seems to be a rule like: "Don't go swimming right after eating." (Om nom nom SPLASH) But what if your story's too big for one volume? Your world too pretty to abandon after 400 pages?

As someone JUST diving into her first ever sequel, I'm lacking on wise words for those wanting to do the same. So, I open it up to the peanut gallery (maybe a cashew gallery...those are better than peanuts.) Have you written a sequel? In the midst of one? Did the idea come after the first volume or was it always planned? Any advice for the sequel-noobs who have no idea what they're doing (me, oh most embarrassingly me)? 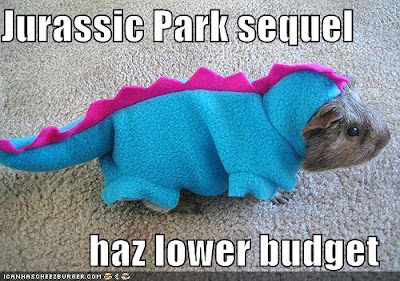 You know, I think I might have enjoyed "The Lost World" more if it had hamsters.
Posted by K. Marie Criddle at 7:42 AM

I have started a couple of sequels but have never been able to finish any to my satisfaction. Although I do have a few *ehem* slated to be finished at some point . . . They are HARD and so a commend your bravery.

Congrats on starting a sequel! I will be super happy to just finish one novel. Just knowing you have enough content to fill another whole book is applause-worthy :).

I have never written a sequel, though for my first novel I one-sentence'd at least six or seven. And my current querying work has a general, overall arc and a sequel arc I can tap into if need be (which, really, a need be's), but we'll see. It either will be picked up, and those sequels will see the light of day, or it won't. (Wow, that sounded really nonchalant there!)

So yeah. No tips, because I haven't written one yet. I know YOU can do it though, because you are just that awesome.

Aw, you guys are too kind! Kudos to all of us for writing something in the first place though, right? I figure writing a sequel is a lot like writing a first book, too: lots of sweat, blood and tears (though hopefully none gets on the keyboard.)

I guess I've written a sequel or two. It was Book 2 that I really wanted to write, so I started Book 1 so I could write Book 2. Go figure. Book 3 was the surprise I didn't count on.

Secrets for noobs? I feel qualified to answer that question when/if these books sell. No need to spread unproven theories, right?

I almost started writing a sequel, but was advised (wisely, I think) against it for the reasons you said.

But I think about it a lot. As someone who's been burned by stealth sequels, I think they should be as standalone as possible. And I think the way to do that is with well-written dialog:

"You remember that time the evil Dr. Shiv nearly killed us all with his plan to clone razor-toothed marsupials?"
"Oh yeah! We would be his slaves now if you hadn't discovered your latent ability to cause animal shedding just by singing Bad Romance. Thanks, by the way."
"No problem. It's too bad I never figured out who I love more: you or your twin brother."
"I know, right? I was meaning to ask you about-- Hey, is that Dr. Shiv on the news?"

My trilogy is on hold for now for two reasons- it's huge and overwhelming to someone who hasn't even completed a stand-alone piece of fiction, and also because the MC of my WIP won't let me work on anything else right now. You're a good man, Jhampo, and I love you. And I you, Robin.

When I'm free to work on my trilogy again though, I fully intend to write it all. Hang the "rules." I'm in love with the story, the world, the people and I'm far too invested (75000 words or so and lots of emotion) at this point to not finish it, even if no one ever reads it.
Step one: outline it all, because I have to know how it ends to figure out how to get there. This one's far too big to panster my way through. But that's just me and an untried theory.

Good luck with your trilogy, friend. In the immortal words of Rob Schneider, "You can DO it!"

Court - I'm the same way sometimes! I sludge through a huge chunk of writing JUST to get to an idea or scene that I just know I can't start with. Good luck getting those books sold, I want to hear the theories! :D

Adam - Ha!! "Bad Romance" will say us all. But I get it and that's the very thing I'm trying to avoid, the whole "Well, you remember, Bob..." thing. But then again, I hate reading sequels a few months after the first and thinking: "Wait, wait? What happened before?" Funny story...back in the day before rampant Harry Potter fandom, I picked up book #3, thinking it was book #1...the whole first chapter, I'm like: "What is going on? Who are all these people? You'd think she'd introduce people a little, sheesh! There's a lot of backstory here that I hope she gets to someday!" But, as always, I digress...

Robin - That's a good idea...I seriously need to outline this whole thing rather than just jump from scene to scene. (mostly the kissing scenes. Spoiler alert: I AM A GIRL.) Good luck on editing #1 right now and the rest of the trilogy! From what I've heard about him, I like Jhampo, too. :D