Taking someone else's brain into a closet

So yesterday I was having an insanely difficult time wrapping my head around a certain scene. The two main characters find themselves together in a very small room, discussing something serious while trying not to admit that all they want to do is make out. I wrote the scene, but there was just SOMETHING missing.

I sent it off to my amazing crit partner with a plea: "Help!" Her response?

"I think you should crawl into your closet and hang out there for half and hour. Drag your husband in with you. Move around a bit. Turn off the light, touch shoulders. Try not to make out with him."

Later that day, talking with my sister the modern dancer, she talked about how even in dance, she has to "get into the head" of characters she's portraying. Of course we see this in actors with their fancy (yet admittedly creepy) method acting: they don't break character even after filming is wrapped for the day. But dancers do it too! The music does so much to inform the dance, but the dancer must also physically become the character. She drags someone else's brain into the dance, hoping to portray that to the viewers.

When whining about my scene to her, she added,"Yeah, go act out the scene in a closet. But drag Hannah's brain into the closet, not yours."

So my question to you, writey friends: What have you done to get into your character's head lately? Have you physically acted out a scene? Listen and responded to music as if you were your main character? Introduced yourself to someone as a character? Gone shopping as they would or affected an accent as they might?

Come on. We all already know we're a little weird. Share!

Now if you'll excuse me, I have to go find a closet. 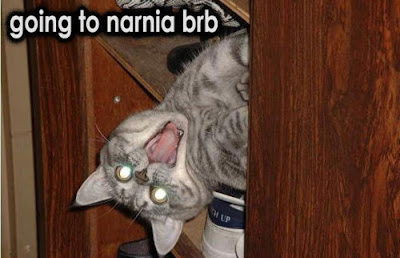 I'm sorry, did you ask something?

Okay, seriously, I rarely pretend I'm my characters (though recently I've been trying to learn how to feel what they feel...it's hard). I have acted out action scenes and spoken with an Air Pirates accent for extended periods of time, though never around other people.

Sigh... How about I just tell you on Monday?

LOVE this. Once when I was jogging, I pretended to be my MC in the dream scene - remember? I wanted to feel like I was flying and not dragging my feet in the sand. I haven't yet gotten inside Ally's head to figure out how she would handle a situation.

Adam - Me too! I've spoken with a Hannah accent, but not around others...and finding identical empathy IS hard. Le sigh.

L.T. - Hee hee...blogger is a harsh mistress. Tell me tomorrow!

Keriann - So cool! I do remember that scene...I remember wanting to feel like that, too! Maybe I should go running...

I've never tried to BE my character- probably because I hate writing in first person (not that you can't get into character using other POVs). But I like to spend time with my characters. I'll imagine myself on a date with them, interviewing them, etc.

Since I'm a third person writer, I figure it's their story and I'm just writing it down for them. I cannot BE them anymore than I can BE you (mostly because I'm a highly inhibited- and therefore BAD- actor), but they are real to me and I get to know them pretty well. You know, like going-to-Germany-togteher-for-a-month well.

When the trip is over, we'll probably need a little break from each other, if you know what I mean.