It's the end of...blah blah, whatever. I feel fine.

As many of us have noted on twitter, tumblr, blogs and facebook, tomorrow is purported to be the end of the world. Now, this good old world has outlasted a whole slew of doomsday prophets and May 21st, most of us concede, is going to be no different. We'll wake up Saturday to a slew of quips on twitter about how Celebrity A is "not gone yet!" and Celebrity B "just saw a rainbow of empty clothes on my front lawn. What does it meeeean?" then on Sunday wake up to a whole lotta retweets. On Monday, life will continue.

But there is the tiny, minuscule part of our brain that does nibble on our conscience and says "What if?" What if they're right? What if this really is the end of the world? Of course there's never a bad time to tell someone you love them like it's your last day on earth or something equally squishy...but yeah. Tomorrow's still probably going to come.

Okay, so what does this have to do with writing? I swear it does. I'd argue that one of the greatest questions we writers have at our disposal is WHAT IF? What if Hitler had won the war? What if there was a game where kids had to kill each other for food? What if, right under our noses, a secret society of witches and wizards lived? And their trains ran in between the normal platforms of the station? And they could make jelly beans that tasted like ear wax?

I LOVE these WHAT IF questions. mostly because it starts a story. As Leslie Knope said on last night's "Parks and Rec"*: "The best part of a relationship is the beginning." It works for me and books, too! The best part is the "what if-ing", the discovery of your story's bones before even writing the first chapter. What if there was a boy? With powers? And a girl? With a secret? And so on...

Anyways, here's to the beginning of new projects and to our dear "what if"s! And, most importantly, if the doomsdayers are right, it has been an absolute pleasure knowing you guys. I'm off to drink some cocoa quickly. 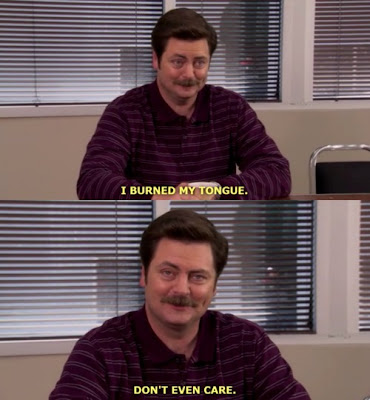 *full disclosure: Despite my ultimate fandom of all things Parks and Rec, I am only halfway through last night's episode. Finishing it is my reward for writing my allotted amount of words today. For the love of Lil' Sebastian, no spoilers! (Okay, fine. You can spoil it.)
Posted by K. Marie Criddle at 11:48 AM

Squishies--- I love you, Marie.

What if's--- I'm not going to dwell on "What if the world ended tomorrow and all this hard work revising I did today ended up being FOR NOTHING?!!"

Instead, I'm going to think, "What if tomorrow is the end... Do I really want to spend tonight doing housework?"

But let's not kid ourselves. Even if the world doesn't end, I still don't want to spend tonight doing housework.

Aw, Peggy! I squishy you too. :D
And hooray for the world still here! Now I can finish writing you that email!