Guys, I don't mean to brag, but I know some people.

I know some people (like Gary Corby) who were awesome enough to think of me when it came time to send out ARCs of their (his) second book in their (his) awesome historical mystery series. And that's how I happen to have a copy of this book, a few weeks before its release date.

I'm betting there are some historical mystery fans out there who would also like to have a copy of this book, a week or two before its release date, amiright?

Amazon.com gives this description of THE IONIA SANCTION:

"Athens, 460 B.C. Life's tough for Nicolaos, the only investigating agent in ancient Athens. His girlfriend's left him and his boss wants to fire him. But when an Athenian official is murdered, the brilliant statesman Pericles has no choice but to put Nico on the job.

The case takes Nico, in the company of a beautiful slave girl, to the land of Ionia within the Persian Empire. The Persians will execute him on the spot if they think he's a spy. Beyond that, there are only a few minor problems:

He's being chased by brigands who are only waiting for the right price before they kill him.

Somehow he has to placate his girlfriend, who is very angry about that slave girl.

He must meet Themistocles, the military genius who saved Greece during the Persian Wars, and then defected to the hated enemy.

And to solve the crime, Nico must uncover a secret that could not only destroy Athens, but will force him to choose between love, and ambition, and his own life."

Now, you guys may have noticed that I am a huge fan of Gary's work, considering that I put his first book up for grabs every time we have a contest here at the Archives. Frankly, I love how Gary makes the ancient world come to life in his books. The plots are twisted, and classic mystery in and of themselves, but they come with a helping of a history lesson that, for a history buff like me, is extremely interesting.

And I think you'll love his work too.

So! On to business. I have an ARC of the next book in the series, THE IONIA SANCTION, due out November 8th, 2011, to give away to one VERY lucky Archives reader.

But! I'm not JUST giving away an ARC of THE IONIA SANCTION. No sirree. I'm ALSO giving away a copy of the first book in the series, THE PERICLES COMMISSION, just in case you've never heard about a mystery series set in ancient Greece and need to catch up. (If you already have THE PERICLES COMMISSION in your possession, we'll talk. I've got some other books I can send along, as well). I am also giving away two THE PERICLES COMMISSION bookmarks that Gary gave me on his tour stop in San Diego last year, along with three mini replica Greek-style statues to adorn your desk in the highest Hellenistic style. Or maybe Roman. Let's be honest. I really have no clue what they're supposed to be.

So! Here's a picture of what you could win: 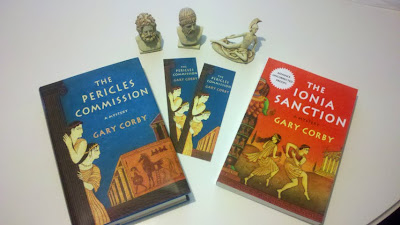 The statues are two busts, and one Angsty Leaning Guy. (Perhaps if Gary stops by the comment section, he might be able to shed some light on these).

Now on to the contest itself:

All you have to do to enter to win is leave a comment on this post, telling me what I should do with the leftover Vegemite I also have from Gary's visit last year. (Preferably besides eating it). Or not. Just commenting will be fine. But it would entertain me to hear your answers. I'd also really like it if you followed this blog, so I'll give you one more entry for that. And if you tweet or blog about it, I'll give you one more entry for that.

So, in an easier to read format:

But you need to hurry up and do this because I am going to draw a winner on THURSDAY, October 27th, 2011. I will accept entries until noon Pacific on that day.

I'd REALLY like you to get this ARC before the book actually comes out. So, if you enter, PLEASE PLEASE PLEASE come back and check the comments section of THIS POST on Thursday afternoon to see if you're the winner, and email me your address so I can send it out ASAP. If I don't hear from you, I'm going to assume you don't care about getting it before the book comes out, which is also fine, but yeah. There you have it.

Minor note: Due to FTC blah blah blah, I should probably tell you Gary's publisher did send me this ARC, along with one to review. It does not change this blog post, nor will it affect the review I will do of THE IONIA SANCTION next week.

Me me!! Pick me! Also, I think you should fingerpaint with the leftover vegemite and then post a picture of it here! Yay!

Also, I've been a follower for ages...and I tweeted this contest.

Can't wait to read this!

Vegemite crafts! With a little poking and prodding and sculpting, you could have an extra bust or Angsty Leaning Guy to give away... :)

Start a compost heap with the vegemite; it sounded dreadful when you first posted about it a year ago. Ick!

Darn, I don't tweet, and the blog post is out because I just posted something for tonight, and I was late with that. . .

But, I'm a longtime follower - if too infrequent commenter - and I read two chapters of Ionian just a bit ago. Man, that is one awesome story. I was captivated from beginning to end and wishing I could read the whole novel.

Angsty leaning guy is Achilles trying to pull the arrow in his heel out. From a statue at Corfu, I believe.

I admit it: I'm not a fan of Vegemite, but I do know two good uses for it.

1. It's a great zit buster (no, really); and,
2. Adding a spoonful or two to a brown gravy yields a delicious savory gravy.

There is just no good use for Vegemite. The name alone kills it. Throw it away, but don't tell Gary. (grin)

I'd love The Ionia Sanction to be my very first ARC.

You can use Vegemite to draw a beard and mustache on your face for Halloween. (Or, if you don't want it getting even that close to your mouth, it may be used as an adhesive for devil horns, wings, tails, etc.)

I haven't Twittled or bloggified, but I'm a long-time follower. (I'm the one who always stays two car-lengths back in the white van.) And whether or not I win the ARC, I loved Pericles. I'm looking forward to Nico's triumphant return.

Um. I think it goes without saying that I am interested in winning this (having been a satisfied customer of The Pericles Commission). and for my +1 I suggest you bring the vegemite to work and trick your co-workers into trying it by pretending it is awesome, then laughing after they take their first bite. Also I am a follower so that is another +1! WOO. I am not tweeting this because I fear competition and have terribly bad luck at winning. SO THERE. Except I will probably retweet something at some point because that is the kind of dork I am, but I really don't feel like that counts for an extra entry so...

LET'S DO THIS THING.

P.S. isn't the angsty leaning guy Achilles or something?

Okay folks! Sorry for the delay, today suddenly became much busier than I'd anticipated. The number drawn by Random.org is . . . 14! Which means the lucky winner is Amalia T! Congrats, Amalia!

Please email me your mailing address so I can get this out to you asap. :)

Stay tuned everyone for my review of THE IONIA SANCTION and a small interview with Gary Corby on Monday! Thanks for entering/ following!

Congratulations Amalia, and a big thank you to everyone who entered, and a HUGE thank you to L.T. for running the giveaway.

I really appreciate it, every one of you!