ALA Mid-Winter 2011: Or, how come nobody ever told me about this before???

Man, you guys. Man. In December, my esteemed Alliterati colleague Marie and I were having lunch when she told me about this little event that was coming to town in January. (Yes, that's right-- we hang out outside the blog. Sup?)

She said it was awesome, because you pay like $25 to get in the door and then she said the magic words:

FREE BOOKS. Like, as many as you can carry. Literally.

I have been salivating ever since. (Yes, I salivate about free books. Don't you?)

So this weekend FINALLY came and we FINALLY got to go. OMG, you guys. It's everything I ever dreamed of and more!

I took my writer's group and we went for a couple hours on Friday night and then again Saturday afternoon. And here in a little while I'm heading back down for more, even though my legs felt like they were filled with lead yesterday. And I can't move my left shoulder. It's all good though. I'm TOUGH.

And the rumors? Totally true. I got as many FREE BOOKS as I could carry. Literally. Sometimes more than I could carry. Hence the leaden legs and jelly shoulders. Totally worth it, though.

And don't worry-- I'll be sharing the wealth! I'll be sure to have a contest or two with some of these ARCs as prizes. Yay prizes!

So, are you ready for this? Here's what I got in two days-- and keep in mind this doesn't include what I'll grab today. 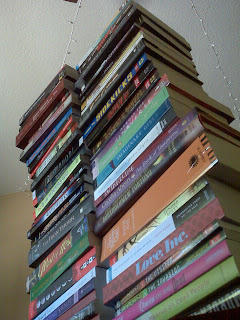 That's the dramatic Godzilla movie angle. Here's a dead-on, though our layout makes it difficult to support bigger pictures so I don't know if you can actually read any of the titles on the spines. 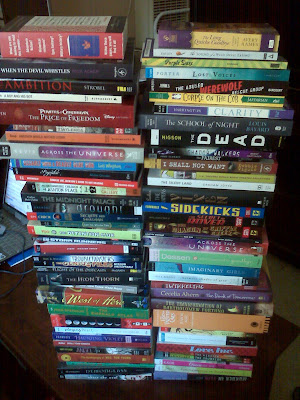 (However, you may click to embiggen)
So yeah. If ALA ever comes to your city? Go. FREE BOOKS, yo.

Oh, and networking, and talking to people who, you know, work in publishing, etc. Ahem.

Great, now I sound grabby. Ah well. Looking forward to all these great reads and sharing some of them with you guys! Did you do anything interesting this weekend? Did any of our readers make it to ALA?
Posted by L. T. Host at 10:30 AM

Email ThisBlogThis!Share to TwitterShare to FacebookShare to Pinterest
Labels: ALA, L.T. Host

I'm incredibly jealous of some of those ARCs/books (Across the Universe, in particular) and intrigued by a good many others (like The Sound of a Wild Snail Eating??).

Kristan-- ATU is incredible! I sucked it up in a couple of days :)

I was a bit overwhelmed when we first got there, but I was too excited about all the awesomeness to freak out. A lot of these just sounded interesting (like TSOAWSE), and others were ones that I had been dying waiting to read.

(But only on Friday night, so my stack is not as big as yours.)

And I think my blog post has almost the same title, hahaha.

LOVE IT. I'm so glad you came! I like to tell the husband that it keeps my from buying new books for AT LEAST a month or two. :)

Next ALA's in New Orleans! Road trip, anyone?

Storyqueen-- Man, I'm sorry I missed you! Would have been nice to finally meet you. Glad you got to come, though. And ha-- great minds, and all that. I feel like it's one of the best-kept secrets out there or something. Except clearly tons of people know because they were all there.

And we will have to talk next time we hang out. Outside the blog. Because we're cool like that. Ahem.

OMG! So jealous! If you want to make me go gaga, don't show me a pic of a cute boy--show me a mountain of free books! Alas, I didn't get to go to ALA, but I plan on going to one sometime in the future. :)

I didn't go to ALA, but one of my future readers did. (As both friend and librarian, she'll be one of my beta readers should I ever finish my novel.) She left with fewer ARCs than you, but only because airlines charge exorbitant amounts for heavy baggage.

Congratulations on your haul!